After the video session we discussed dance as another form of language. Choreographers use it to express emotions, represent relationships, comment on social and political issues, in a way that words and speech may not be able to. That’s the beauty of it!

In our next session everyone was given the task to make up one or two moves that expressed how they were feeling about leaving school this year. Once the girls were happy with these I put them into groups of three where they began teaching eachother their individual moves and then combined them together to make a short phrase. Each group then shared their short trios at the end of the session and we all got to see the wonderful variety of movement and creativity that emerged. I was delighted with the out come of this and impressed with some of the original ideas, creative use of space and interesting interpretations of the task that arose.

Both the girls and I wanted to spend more time on these so we carried the trios into the next few sessions. We worked on extending them as well as clarifying the movement quality, pacing, rhythm and performance within each trio. I also got the groups to help each other by breaking the class into three larger groups with three trios in each. Two groups would look at the other trios work and give them useful feedback and helpful suggestions, swapping round so everyone gets a chance to share as well as feedback.

We are currently working towards a small sharing where we will show a few of the different techniques, sequences and creative works we have explored over the course of our sessions together. We had a great session this week where we started putting sections of work together. I was really impressed with the concentration and quality which the girls brought to this and I’m excited we are going to have a chance to share this work with the rest of the school.

I wanted to give the girls a bit more of a context for the work we have been doing in our lessons so I decided to use one of our sessions to explain a bit more about the history of contemporary dance and show them the work of some influential choreographers, past and present.

Below are a list of links to the videos we watched as well as the names of the choreographers we chatted about.

The Cost of Living by DV8 Physical Theatre Company

We have been working on partnering within movement over the last few sessions. Experimenting with sharing weight in pairs to build up an awareness of weight distribution – how much you can take and how much you can give your partner. These will be the building blocks for duets.

We played with a partner lead/follow exercise where A places a hand on B’s shoulder and closes their eyes, B then leads A around the space. This is a way of building trust, awareness and concentration between these two partners. We then developed this to have the leaders running, walking backward, going to the floor, hopping while A still followed with eyes closed, trying to listen with only their hand in contact with B’s shoulder. This was a very interesting exercise as it got the girls working in a different way than just remembering a sequence and executing it. Their movement became freer as they were concentrating on leading and following rather than a sequence. From this there emerged some really creative and beautiful movement and imagery. There was a quiet focus within this exercise as I was asking the girls to try to listen to movement instruction with the part of the body in contact with the other person rather than talking, which can be very difficult. 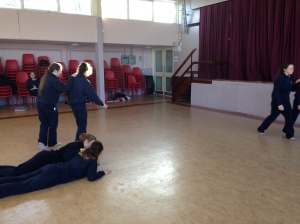 We are starting to develop this duet from a lead/follow partnership by experimenting with giving movement information to different parts of the body, not just the shoulder. What if you were to move your partners knee, or hip, or head? How do they respond to this impetus? I look forward to seeing what the girls create through this exercise using their own movement vocabulary and open imaginations. 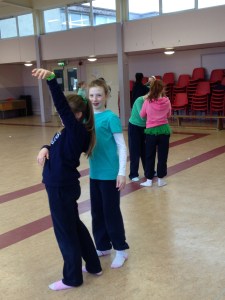 I began our first lesson by introducing myself to the girls and asking them to tell me a little bit about themselves and their experience of dance – have they ever taken any classes? Seen any live performances? Watched it on T.V.? There were a wide variety of responses – from girls who had taken several different dance classes to ones that didn’t ‘do dance’. I did notice, however, that once we began moving the class as a whole were very focused and engaged. I noticed a general openness to giving things a go physically, even though they may have said otherwise verbally. I of course was delighted with this as I realised I could challenge them a little more than I originally thought.

As we have only short sessions this term I have decided to focus on giving the girls a grounding in some contemporary technique and ideas. They can later use these tools in our longer sessions as a foundation for creating their own movement.

Most classes have begun with some form of game:

– Walking the space and following instructions as I tell them to either jump, go to the ground, stop or walk backwards. I ask them each time to fill the space leaving as few gaps as possible. The aim of this exercise being to build awareness about their surroundings and follow instructions whilst moving the space.

– Another game we have played in this time is one where the class is split into 4 different groups and each group is given a movement task – melt, jump, spin, stop. Using the beats in the music each group has to perform their movement on the beat they’ve been allocated, and then walk the space for the remaining beats until theirs comes round again. I find this a very effective away to introduce musical awareness, listening skills and concentration. It was also really good fun with this class and visually looks very interesting.

I go through a short warm up of different parts of the body, incorporating stretches, exercises for alignment, core strength and balance.

We have been working on developing a short sequence of movement which we build on every few weeks depending on what new technique or movement idea we work on in that class. The last time we visited this sequence we incorporated floor movement. It was something the girls found challenging but they asked questions and kept trying. I got the sense that they really wanted to understand how to do it. By the end of the session everyone was definitely getting a lot more comfortable with being on the floor and using the weight of the body to build momentum. We will come back to this in a later session and experiment with ways to get back up from the floor again using our weight and speed to build up momentum.